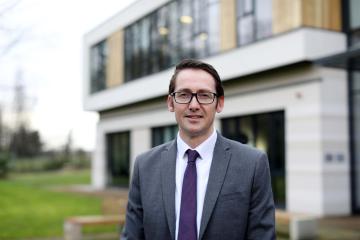 This week, the Intergovernmental Panel for Climate Change (IPCC) released its new report on the climate crisis, outlining one of the most significant challenges of our generation.  The report was stark, yet simple in its findings – human activity is in danger of rendering the planet unliveable and things need to change:

“Global surface temperature will continue to increase until at least the mid-century under all emissions scenarios considered. Global warming of 1.5°C and 2°C will be exceeded during the 21st century unless deep reductions in CO2 and other greenhouse gas emissions occur in the coming decades.”

While the report paints a bleak picture, it also provides us with the solution, laying out a clear roadmap of what countries, governments and businesses need to do to reverse this “code red for humanity”. Now, more than ever, we need to commit ourselves to a net-zero carbon future.  The decarbonisation of electricity is a key part of this.

Last year, almost half of Northern Ireland’s electricity needs came from renewable energy. This success is testament to innovative and collaborative work by SONI, our colleagues at Northern Ireland Electricity Networks, government, our regulator and the industry as a whole.  There is still much to do not just on the 2050 horizon, but over the coming years, particularly as we look to 2030, and at what electricity from renewables goals may be set by Stormont in its forthcoming Energy Strategy.

In March of this year, SONI launched 'Shaping Our Electricity Future’, a blueprint that sets out four possible approaches to develop a cleaner and greener electricity system and which will be our roadmap to help achieve Northern Ireland’s future renewable energy ambitions.

We firmly believe Northern Ireland can become a leader in the global fight against climate change by transitioning towards an energy system powered by renewables and by reducing our dependency on fossil fuels.

Preparing Northern Ireland’s electricity system, in line with the approaches set out in ‘Shaping Our Electricity Future’, requires significant infrastructural developments in the form of the North South Interconnector, further strengthening of the local grid and additional interconnection to GB.

A stronger more flexible grid will support the delivery of Northern Ireland’s future energy targets and will also increase downward pressure on wholesale electricity prices, while providing for an even more secure and reliable electricity supply for consumers.

So, while we reflect on the report issued by the IPCC, and look ahead to the UN COP26 summit in Glasgow, and also to Northern Ireland’s new Energy Strategy, it is important to recognise that there is no single solution to the challenges presented to us; it is imperative on us all to act collectively in order to protect our environment and our future.

At SONI, it is our responsibility to plan and operate an electricity transmission system that is both sustainable, secure and efficient and which will simultaneously meet the energy demands of generations to come. We are confident in our ability to deliver this for Northern Ireland; the IPCC report has strengthened our already steadfast resolve.